SWTOR showed its appreciation to its supporters by giving away a free Mini Mogul NM-1 Minipet. Check your mail to claim your gift.

This is part of Star Wars: The Old Republic United Forces Update. Its to promote multi-player game experience.

While some players prefer to play solo in completing their quest either Class quest or planetary quest, this update is SWTOR’s way of encouraging players to group and enjoy various content intended for multi-players.

Prior to the update there are several ways to form a group or search for a team in various game content but then again with few players playing in the same faction or in in the same server its just taking for some to find a group for that content.

Now recently Star Wars: The Old Republic had a server merged prior to the United Forces Update, hopefully this will bring players back in the fold of forming a group and enjoy the game with fellow players.

For now SWTOR Team Thanks for this gift.

The Mail Message from Star Wars: The Old Republic with the free minipet attached. 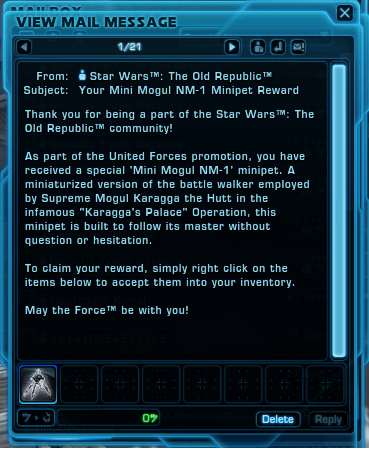